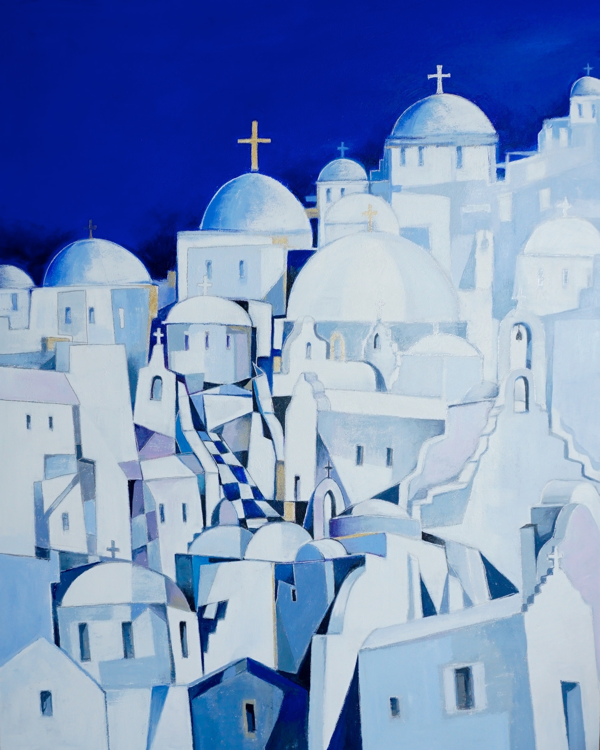 MYKONOS March 2017 – A beautiful island in the Cyclades, wonderful architecture, an historical site.

To visit Mykonos out of season is an experience in itself. Instead of a populous landscape of tourists, we had the greeks all to ourselves. 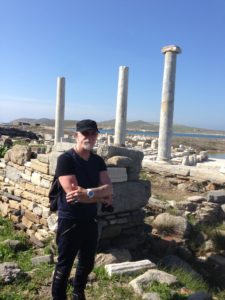 As we arrived a month before the season begins, we were blessed with full attention from the people who run the restaurants, the shops, the hotels. It was very interesting to hear their stories about their island. Gorge who was born in Mykonos, was working at a bar club that never closes. It seems the custom that once opened, the bars, clubs never closes till the last person leaves and during the season could be 6am.

They know how to cater to their visitors and this is why Mykonos has the reputation of one of the most fun islands in the world.

We were captivated with the activity going on in preparation for the onslaught of international tourists. From renos, to plastering the buildings. then painting them white- as the whole town is white. Even the ancient pathways, a real art form, different size stones, which are painted white around each stone. These pathways are like a maze, if one is not good with direction you will never find that wonderful little restaurant that everybody told you whatever you do, you have to go there.

We were so impressed with this maze, that we looked it up to understand how and why the Greeks created these secret pathways, and low and behold it was done thousands of years ago for the pirates, they were so confused that they often left with nothing in their hands.

The historical churches was another phenomenon, all white with red or blue domes, 800 in all – some going back thousands of years, everywhere you look they are there. History is before your eyes, every direction and then you get a history lesson from Kostos working at the Kalender restaurant in Chora. He was from Athens and working there for the summer – 6 months everyday, long hours, but as Kostos says, the best experience ever, is working on the island of Mykonos. He sure knew his history. Mykonos — with its windmills, were well ahead of the rest of the world.

We took a ferry to the neighbouring island of Delos, about 20 minutes from Mykonos –at the time it was the ancient major international port in the world—an open air museum of ancient ruins, some still in tact including the torso of Apollo, they say one of his legs is at the British Museum in London, and who knows where his head lies. 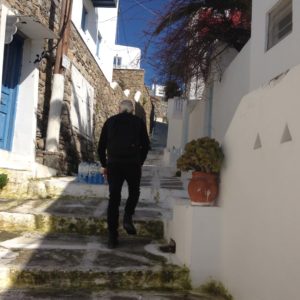 Mykonos – painting by Ygartua, inspired by his fascination of the ancient white churches –a collage giving a surrealistic overtone, leaving it white on white with depth and texture.”

Mykonos has challenged me to interpret their religious churches and temples

“This collage of all the churches is done in a surrealistic modern style. The history

of these churches dates back four thousand years and are some of the oldest in the world.

The whitest of whites, a whitewash, is a pure form Mykonos stands for. The purity of this is a natural part of the cliff, it looks like they‘re sculptured masterpieces coming out of the rock formation, and to bring, to identify a religious formation– there is a simplicity– the first impression is stark and royal.

The historical churches are hidden amongst the vast maze of white buildings where you will find on a slight hill the oldest church in Greece which is formed by three small churches, building a sculptural effect of white on white.

Near this you will find three or four more domed buildings, small temples or churches all within a hundred yards of each other, the one church is on the cliff just above the Venice beach, where the buildings go straight into the water. A few steps away from this wonderful old church is the main beach of Mykonos where restaurant upon restaurant are working frantically to get ready for the summer onslaught and on the side of the pier where the fisherman are beating the hell out of the octopus and squid, a daily event, then their catch goes to the outdoor fish market right on the beach in front of the restaurants.”

The famous majestic windmills entour the mountain side looking down onto the beach town of Mykonos, creating a sublime landscape.